Lubbock, TX – The Lady Panthers battled through a close ball game to start Day Two of the Lubbock ISD Softball Tournament.  Permian posted wins in both contests, first over Canyon Randall and then Amarillo Caprock. 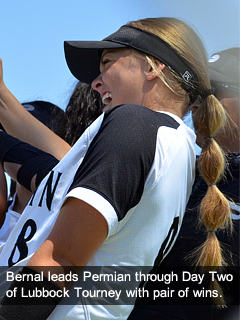 A walk-off double by Mackenzei Bernal paved the way for Tiggy Rayos to add the winning run in the bottom of the fifth inning for a 3-2 decision over Canyon Randall to start the day for Mojo.  Alexis Belen got the start in the circle, striking out six and limiting the Lady Raiders to two runs.

After a silent first inning, things heated up in the second.  Randall converted three singles, a pair of walks, and a triple to take a quick 2-0 lead.  The Lady Panthers tried to answer in the bottom half but stranded two runners, after each got aboard off of base hits.

Permian started to turn the tide in the bottom of the third.  Madi Garcia sent a one-out bomb over the centerfield fence to cut the difference to a run.  Mojo retired the side in the top of the fourth and immediately went back on the offensive.  Belen singled to left to setup the next score.  Anyssa Cruz hammered a two-bagger to the wall, allowing pinch runner Kadence Cornelius to round the bases from first to cross the plate and knot the game at 2-2.

In the top of the fifth frame, the Lady Raiders watched a flyout and strikeout limit their scoring opportunities.  Garcia made a diving catch on a hard hit shot between short and third to hand Randall the final out.  As the time limit entering the picture, the Lady Panthers completed the rally in the bottom of the fifth inning.  With one out, Rayos beat out a blooper down the third base line to safely reach first and represent the potential winning run.

Bernal was handed a strike on the first pitch of her at-bat.  Rayos stole second base as the count fell to 0-2. After battling through a high outside pitch and three foul balls, the junior shortstop ripped a shot that dropped into deep left centerfield for the RBI double.  Rayos easily made it home for the Lady Panthers to claim the 3-2 win.

The Lady Panthers added to their win streak by dominating the Lady Longhorns in the Day Two nightcap game.  Permian used a steady dose of defense behind pitcher Anaya Paredes, who struck out five over the four innings.  Offensively, Mojo erupted with six runs in the fourth inning to dish out a 9-1 loss to Amarillo Caprock.

As visitors, the Black Cats grabbed the bats first.  Behind a base hit by Anyssa Cruz, RBI double by Mackenzei Bernal, and a wild pitch, both were able to cross the plate for an early 2-0 advantage.  A lead-off homerun by Taylor Ramirez in the following inning to push the Mojo lead to 3-0.  Caprock matched the blast, that also went yard, to pull back to within two runs after two complete innings.

The Lady Longhorns would send a total of four batters to the plate in the third stanza, while the Lady Panthers sent five in the lone scoreless inning.  In the fourth frame, Mojo exploded with a six-run surge to put the game on ice.  Madi Garcia and Tiggy Rayos put together back-to-back hits, and Cruz drew a walk to load the bases.  All runners advanced when a wild pitch kissed the backstop.  Bernal stepped in and belted a shot over the right centerfield fence to clear the bases and give Permian a 6-1 lead with just one out.

Makayla Sanchez kept the assault going with a single up the middle.  Iliana Garcia followed with a bloop single.  Madi Garcia rocketed out an RBI double for another run, and Ramirez capped off the scoring with an RBI base hit to make it a 9-1 ball game.  In their last at-bat, the Lady Longhorns offered a pop-up to shallow second base, a strikeout, and a soft grounder to Paredes in the circle for the final out of the game.

Permian will conclude the tournament with games against El Paso El Dorado and Lubbock Monterey on Saturday.  Mojo will take on the Aztecs at 1:00 p.m. followed by the finale with the Lady Plainsmen at 5:00 p.m.  Both games will be hosted at the Monterey softball field.