Lubbock, TX – The Lady Panthers opened the Lubbock ISD Softball Tournament with a tough loss to Lubbock-Cooper before rallying back to run-rule Lubbock High in the first day of the three-day event. 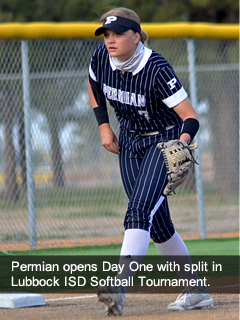 Permian tried to set the tempo early with Taylor Ramirez sending a crisp shot to right field for the lead-off double.  Madi Garcia joined her on base after getting hit by a pitch.  Unfortunately, a double play and flyout left the runners stranded.  Lubbock-Cooper heated up their bats and scored a run off of three consecutive base hits.  The Lady Pirates led 1-0 after one inning of play.

The Lady Panthers responded with a pair of runs in the top of the second frame.  Iliana Garcia led with an infield single, and Alexis Belen ripped a shot to right field to post runners at second and third.  Nyssa Dunn slapped out a base hit to fill the bases.  Anyssa Cruz stepping into the batter’s box and ripped a double to left field to plate the two runs for Mojo to take a 2-1 advantage.

After retiring the Lady Pirates in the bottom of the second, Mojo tacked on two more runs in the third inning.  Base taps from Mackenzei Bernal and Garcia and a base on balls once again loaded the bases.  A squeeze bunt by Dunn scored Bernal and Mojo cashed in on a wild pitch for Permian to take a 4-1 lead.

Lubbock-Cooper summoned the home field hex in the bottom of the third.  A lead-off homerun was followed by six base hits and a hit batter to propel the Lady Pirates to a seven-run surge and 8-4 lead as the timed game entered the fourth inning.  Ramirez opened the last at-bat with a hard-hit ground ball to centerfield.  Garcia followed with a triple to plate Ramirez.  Tournament time limits are strictly enforced, and were, as the potential Mojo rally was abruptly cut short.  Permian ended on the wrong end of a 8-5 decision.

Permian posted runs on the scoreboard in every inning of the day’s second game en route to a 14-1 dismantling of Lubbock High.  It is the second time this week that Mojo has handed the Lady Westerners a lopsided loss.

The Lady Panthers got off to another positive start by utilizing an RBI single by Makayla Sanchez to plate Cruz in the top of the first.  Permian added another run in the second inning for a 2-0 lead.  Madison Whitefield and Anaya Paredes got board by free trips to first.  An RBI double by Ramirez green lit Whitefield to cross the plate.

The Black Cats went into attack mode in the third stanza, racking up five runs off of four hits.  Tiggy Rayos led off with a single to right field, and Sanchez followed with a double to center to score Rayos.  Garcia sent Sanchez to third with another double.

With the bases full, Whitefield drew a walk for a free run.  Garcia stole home two pitches later to push the lead to 5-0.  Permian wasn’t through just yet.  A two-run RBI single to centerfield by Paredes gave Mojo a seven run lead.  Lubbock got one run back in the bottom of the third on an RBI double.

Homeruns by Sanchez and Kadence Cornelius, and a double by Cruz, gave the Lady Panthers a 10-1 lead in the top of the fourth inning.  The Lady Westerners could only look on in frustration as they were retired in order in the bottom half.  A pair of RBI doubles by Cruz and Sanchez extended the Mojo lead to 14-1 in the fifth.  A Permian double play ended the contest for Lubbock High.

Day Two of the Hub City tourney will feature Permian competing against Canyon Randall in the noon game, and the Lady Panthers will follow that with a date with Amarillo Caprock at 6:00 p.m.