Odessa, TX – The Mojo soccer teams hosted the Frenship Tigers in a district match-up on Tuesday that resulted in a win for the girls and a draw for the boys at Ratliff Stadium. 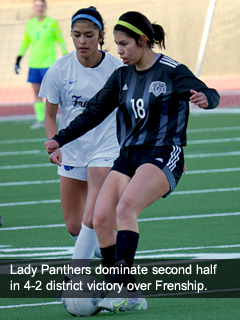 The Lady Panthers opened the day with a performance that keeps them at the top of the district standings with San Angelo Central.  Nyxalee Munoz led Mojo with a pair of goals, while Mya Gonzales and Anai Lopez provided plenty of backup for Permian to claim a 4-2 decision over visiting Frenship.

Defense dictated the tempo in the first half.  Munoz drew a foul midway into the half.  That setup Gonzales to split the pipes on a penalty kick for the early lead.  The Lady Tigers were able to respond and even the match for a 1-1 tally that would last into the intermission.

Frenship gained a one-goal advantage as the second half began to unveil itself.  Munoz found the back of the net for an answer, with the assist being credited to Gonzales to knot the contest at 2-2.  Permian established the upper hand four minutes later when Lopez converted off of a corner kick for a 3-2 edge.

As the chilly winds began to elevate, it wouldn’t deter the Lady Black Cats from completing the task.  The Mojo girls added an insurance goal as Munoz advanced a pass from Gonzales inside the 20-yard line and into the net for the 4-2 victory.  The Lady Panthers improve to 9-3-3 for the season, 5-1-2 for 12 points in district play.

CATS BATTLE TO DRAW
In the nightcap, several battles in the trenches were fought between the 35-yard lines most of the contest.  Frenship managed to penetrate the Mojo defense for the lone goal of the first half for a 1-0 lead.  Riding the defensive tone, neither team could get deep enough to produce any accumulated scoring opportunities or shots on goal the remainder of the half.

Permian’s Adrian Martinez came up with the equalizer in the second half, when the junior sent a long-range rocket into the upper corner of the Frenship net for the 1-1 tie.  The battle raged on the remainder for the Black Cats and Tigers, forcing Permian to settle with the draw while still collecting a valuable district point.

The Panthers stay in the hunt for a playoff spot with a 3-3-2 mark for eight district points with four matches remaining on the schedule.

The Mojo soccer teams will be back in action on Friday for the crosstown showdown with the Bronchos. The Lady Panthers will kick things off at 5:30 p.m. and the Permian guys will follow at 7:30 p.m.