Abilene, TX – It would take an extra overtime period for Permian to defeat Keller 67-66 in the Class 6A Area Round playoff at the Abilene Wylie high school gym on Friday night. 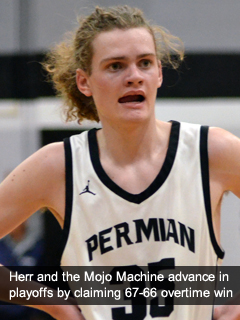 After battling to a 60-60 deadlock at the end of regulation, it would take a pair of free throws by junior guard Tremayne Baty followed by Race Herr’s big league shot block to secure the Mojo victory.

Asked about the performance of the Mojo Machine, head coach Steven Flores was proud of the young Panthers for staying the course in the high profile game.  “We stayed resilient.  There were times we could have went south but kept on fighting.”  And that, the Black Cats were able to successfully do.

With Mojo now moving forward in the playoffs, Flores added, “We just have to believe we can beat anyone we line up against, and continue to compete every possession.”

Permian watched Keller jump out to a quick 7-0 lead before Herr and sophomore Ben Saldivar ignited the charge for the Panthers.

The Permian surge was fueled by four treys as Saldivar dropped two through the cylinder, with Herr and Jamibrione Anderson also adding perimeter buckets.  By quarter’s end, the Indians made two of their own three’s en route to holding a two-point edge at 20-18.  Both teams added another 13 to their tally in the second stanza for Keller to sit on a 33-31 advantage at the halftime break.

The tempo heated up in the third frame as both offenses exchanged short runs and lead changes.  After battling to an even 41-41, Keller tacked three consecutive baskets on the board.  Permian responded with a Herr bucket and a pair of three’s from Saldivar to go up 51-50.  The Indians capped the third quarter with a goal plus one to regain a 53-51 lead.

The contest took a different turn in the fourth stanza.  A strong defensive stand and missed shots resulted in both teams being held to single-digit scoring.  The Panthers successfully covered the earlier two-point deficit and brought the battle to a deadlocked 60-60 tie, sending the game into an overtime period.

Three lead changes started to favor Permian when Saldivar was fouled attempting a three.  Making two of those free throws cut the deficit a one-point with under a minute to play in the extra quarter.  After getting fouled in the back court to halt the clock, the Indians went to the line in the bonus but missed the one-and-one shot.  The Panthers would get another chance at pulling out the victory.

Bringing the ball past mid-court, Baty drove into the lane and was denied but got fouled with just 11 ticks to play.  With ice in his veins, the junior guard made the first from the line to tie. He would then sink the second for Mojo to go up by one.  Quickly, the Indians advanced the ball to half-court for one last gasp.  Driving into the paint, the shot was slapped away as Herr blocked the attempt to secure the 67-66 Permian win.

The Mojo Machine (26-8) will now prepare for a rematch with North Crowley (29-6) next Tuesday.  The two teams met last year in the Area Round of the state playoffs with Permian coming up one point short in Clyde.  The Panthers from the metroplex are winner’s of District 3-6A and beat Odessa High 45-44 with a last-second trey tonight.

The Regional Quarterfinal will be played on March 1 at the Abilene High’s Eagle Gym.  Tip has been set for 7:00 p.m. with Permian designated as visitor.