Abilene, TX – Permian kicked off the 2022 season this evening at Shotwell Stadium.  While the defense held Abilene High to 48 yards of total offense, Mojo put together a strong second and third quarter to cruise to a 17-3 victory. 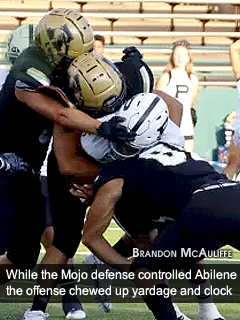 The Eagles’ only points in the game came on a second quarter field goal, set up by a 55-yard interception return.  With 1:58 to play in the first half, the Panthers came roaring back behind quarterback Rodney Hall.  The senior utilized four completions to move the ball into Abilene’s end of the field.

On a 35-yard bomb from Hall to Tabarie Jones, Permian grabbed a lead they’d never relinquish with 29 seconds until the intermission.  Mojo would sit on a 7-3 lead at the break.

The Panthers opened the second half with a long sustaining drive that was capped off with a Tate Terry 33-yard field goal to increase the deficit to 10-3.  The stingy Mojo defense would prevent Abilene High from crossing the midfield stripe the remainder of the game.

Meanwhile, Permian added another score on a 15-yard scamper by Hall for the 17-3 advantage late in the third quarter.  He would end the game with two touchdowns – one through the air and one on the ground – en route to an 85-yard rushing night.

Juzstyce Lara had 12 carries for 58 yards, and Jones added 31 rushing yards and 59 receiving.  Permian will be in Ratliff Stadium next Friday for its home opener against Waco Midway.