Odessa, TX – The Permian varsity volleyball team gained momentum as the evening went on en route to sweeping Lubbock High (25-15, 25-19, 25-9) in a non-district date at the PHS Fieldhouse. 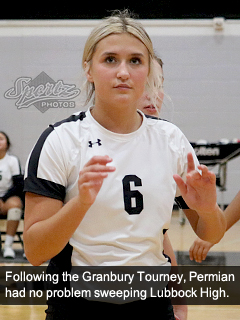 Junior Jade Workman had a busy evening against the Westerners.  She was responsible for 10 kills, 10 assists, two aces, and a block in the winning effort.

Layny Brown led the Lady Panthers in assists with 19 and had three digs.

Iliana Garcia joined in on the fun and logged five digs.  She also served up three aces.

Permian will turn its focus to the last tournament on the varsity schedule, the Godley Volleyball Tournament, this coming weekend.  Pool play is on Friday and the bracket competition will follow on Saturday.