Odessa, TX – Following the District Championships held on March 24-25 in Abilene, the Permian gymnastics team will compete in El Paso this weekend in hopes of securing spots at the State Championships later this month. 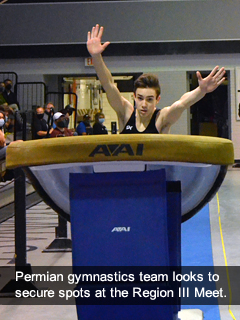 The Region III Championships will be held Friday and Saturday at the Bel Air Athletics Complex with Permian, Odessa High, Abilene High and Cooper, Lubbock High, and teams from El Paso attending.

The Permian boys finished in second place in the team standings at the district meet with a 287.700.  Junior Sincere Galindo led the Mojo gymnasts in All-Around with a 102.500 to take second place.  Sophomore Jared Gonzalez finished with a 83.100.

The Black Cat girls team also claimed a second place finish with a score of 203.650 and will need a 215 or better to advance to the big dance in Rockwall.  Senior Isabella Fanucci led the Lady Panthers with a two-day 72.150 in All-Around, and Sydney Vaughn, also a senior, followed with a 68.850.