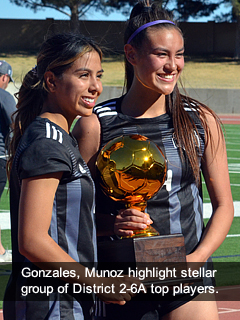 Lopez, just a sophomore, was named the district’s Newcomer of the Year just a year ago.  She credits her success to teamwork.  “I wouldn’t have had the success that I did without my coaches, and especially my teammates, as we put in a lot of work together. I’m proud to be on this team and am so thankful for everything they have done for me.”

Head coach Chad Peterson thought the district made some excellent selections, and well deserved ones at that.  Asked to reflect back on the season, he shared a very insightful view on the challenges that Permian faced in 2022.  “We talk every year about how the team overcomes this and that, but this year we really did it on week-to-week basis at times. We overcame what could have been a disastrous January, where we lost as many as nine players to season ending injuries.  We had to revamp our back line and midfield on what seemed to be every game day.  Other teams might have folded the tents and decided it wasn’t worth working for, but that is not how our kids are wired.”

Coach Peterson explained, “They [the Lady Panthers] adapted to every roster and lineup change and continued to work harder and harder for each other. Obviously the ending wasn’t what we wanted, but the way we got there was nothing less than impressive on many different levels.”

Permian finished the 2022 season as Class 6A Bi-District and Area Champions.  Mojo finished second place behind San Angelo Central in the final District 2-6A standings with a 7-3-2 record (15-6-3 for the season).