Odessa, TX – Mojo started off strong in Saturday’s crosstown district tilt with Odessa High.  Permian gave up a five-run third inning to allow the Bronchos to turn the tide and claim a 9-3 win at the Ratliff Softball Complex. 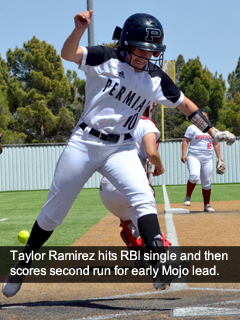 Sophomore outfielder Tiggy Rayos led the offensive effort for Permian, finishing the game batting three-for-three at the plate and scoring one of three runs for the Black Cats.

Odessa High opened the game loading the bases, but Alexis Belen worked out of the bind and the Lady Panther gloves denied any damage.  Permian immediately went to work in its first at-bat and slapped a pair of runs on the scoreboard for a quick 2-0 lead.

Rayos led off with a hard hit shot to centerfield on the first pitch offered.  Taylor Ramirez followed with an RBI single to right field to plate Rayos.  Emma Chavez blooped a grounder to the infield, which was misplayed.  As a result, Ramirez scored on the play for the two-run advantage.

In the second frame, Odessa High stranded two runners in its at-bat while Permian was dealt a short inning by absorbing three consecutive strikeouts.

The Lady Bronchos blew the game open and made their presence known in the third inning.  Converting six hits into a five-run surge, which included two homeruns, OHS gained a 5-2 lead that they would build on the rest of  the afternoon the next two innings.

The fourth frame consisted of another homerun by the Lady Bronchos, while MaKayla Sanchez donated the lone hit of the inning for the Lady Panthers’ turn at the plate.  Odessa High utilized four hits to add three more runs to the tally in the top of the fifth.  Mojo would trail 9-2 after another silent bottom half of the inning.

Belen hammered a two-out bomb over the left field fence in the sixth for the game’s final run.  The last at-bat for both teams consisted of six batters and three outs each.  Permian had fallen to its crosstown rival by a 9-3 deficit.

The Lady Panthers will visit Midland High on April 13, before hosting their final home game of the district slate.  San Angelo Central will be in town on April 16.  Mojo will close out the schedule the following Friday with a road trip to Midland Lee.