Midland, TX – The Permian girls scored two first half goals and held on to remain unbeaten at Grande Communications Stadium on Tuesday.  Midland High fell 2-1 in the night cap.  The Bulldogs won the boys match earlier in the evening. 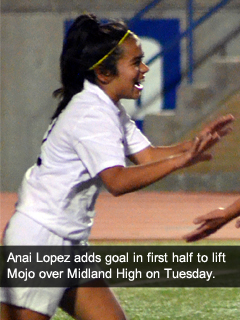 Nyxalee Munoz found some open space midway in the first half to get Permian on the scoreboard.  The bullet kick was assisted by Jaden Sosa.  Five minutes later, Anai Lopez danced her way into the box and punched it in for a 2-0 Mojo lead.

As time was running down on the half, Midland High’s Tess Moylett was able to sneak the ball in from in front of goal to cut the deficit to 2-1 at the break.

Neither team could add to the tally, though the Lady Bulldogs made a couple of serious threats late in the game.  The Mojo defense held strong to secure the victory.

The Lady Panthers have amassed 17 district points and own a 11-0-4 record. The Permian ladies possess a 7-0-3 district mark with a big match coming Friday.  The Lady Bobcats from San Angelo have 15 points and are currently 7-1-1.

The much anticipated district clash will be played at Ratliff Stadium’s south turf field.  The Lady Panthers utilized a Munoz goal in the second half on February 10 to hand Central their lone district loss to date.  A lot will be on the line this coming Friday for both of Permian’s boys and girls teams.

In the early match, the Bulldog guys got on the board first just five minutes into the contest.  Johnny Cuellar came up with the evener midway into the first half.  Midland High kept the pressure on and managed to regain lead for the second time.  This time for good.  Daniel Nunez accounted for three of the goals for Midland High.

Breakdowns in the Mojo defense allowed Midland to take some extra shots on goal but failed to do any more damage in the half.  The Bulldogs extended their 2-1 lead with three more goals in the second half to hand the Panthers a 5-1 district loss.

The Panthers are now 7-7-3 for the season and 3-4-3 in district play.  Permian has accumulated nine points in the 2-6A standings.  The Mojo Boys will play Friday back at Ratliff Stadium south turf field and also host San Angelo Central.