Odessa, TX – As the season inches its way toward post-season play, both the Permian boys and girls added points to their district tallies.  While the Lady Panthers remained unbeaten with a draw to Abilene High, the Mojo boys ripped through the Eagles in a shutout slam on Senior Night in Ratliff Stadium. 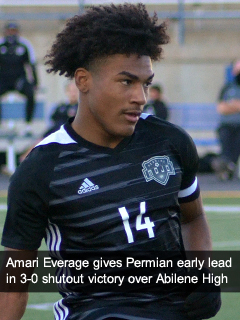 Even as they let scoring opportunities get by in the early match, the Panthers controlled much of the match.  The Abilene High boys quickly found it difficult to advance a lot of offense past midfield.  Strangely enough, Amari Everage was responsible for the lone goal in the first half.

What was even more strange was the way the lone first half goal came about. As Permian was advancing the ball deep into Eagles territory, a shot from the left wing was defended by the goalkeeper but he failed to clear.  In turn, the deflected attempt bounced back and hit Everage squarely in the face which ricocheted into the net for the goal.  The 1-0 lead would hold into intermission.

The Panthers continued to dictate the tempo in the second half.  The Mojo defense played at a higher level than in the earlier meeting with the Eagles, which ended with a 4-3 loss in Shotwell Stadium.  Permian added two insurance goals as proof of an improving team.  Aaron Hernandez and Johnny Cuellar each added a goal to extend the difference to 3-0.

With the Senior Night win, the Panthers are now 7-6-3 for the season and 3-3-3 in district play.  Permian has accumulated nine points in the 2-6A standings and sits one point behind Frenship and San Angelo Central, which are currently tied for second place.  The surging Black Cats will play tomorrow at Grande Stadium against first-place Midland High.  The two teams battled to a 1-1 tie in their first meeting.

The Mojo girls continued their unbeaten streak in the late game.  Nyxalee Munoz turned in another solid performance, recording two goals in a 2-2 tie with Abilene High.  She collected her first goal with an assist by Anai Lopez to give the Lady Panthers a 1-0 lead.  Abilene was able to come back with an equalizing goal to make it 1-1.

Not to let the match get away, a direct kick by Munoz put the Lady Panthers back up by a goal. Permian would take the 2-1 lead into intermission. A defensive struggle ensued after the break.  With neither team budging, it would be the Lady Eagles that caught a break and scored goal to re-knot and deadlock the match at 2-2. That how it would end.

Each team added a point to their district tally.  The Lady Panthers have amassed 15 district points and own a 10-0-4 record. The PHS ladies are sporting a 6-0-3 district mark with three matches remaining on the district schedule.  The Lady Bobcats from San Angelo also have 15 points and are currently 7-1-1.

After making a trip to Grande to play Midland High, the week will conclude on Friday with Mojo hosting San Angelo Central.  The much anticipated district clash will be played at Ratliff Stadium’s south turf field.  The Lady Panthers utilized a Munoz goal in the second half on February 10 to hand Central their lone district loss to date.  A lot will be on the line this coming Friday for both of Permian’s boys and girls teams.